The following points should be taken into consideration when applying autologous formalin-fixed tumour vaccine (AFTV or AFTVac). For the success of AFTV therapy, it is essential to select the right time for its introduction.

Autologous Formalin-Fixed Tumour Vaccine Can Be Administered in Combination With Radiotherapy, Peptide Vaccine and Chemotherapy

Radiotherapy can be combined with autologous formalin-fixed tumour vaccine without any problem. It should be borne in mind, however, that radiotherapy may temporarily lead to a significantly lower WBC count. Therefore, autologous formalin-fixed tumour vaccine should be introduced when WBC count hits bottom (the actual value of which depends on individual patients and cannot be defined in general) and starts to recover. [1]

Anti-cancer agents can be used in combination with autologous formalin-fixed tumour vaccine provided that certain conditions are met. AFTV can be used concurrently with an anti-cancer agent if the dose of the agent is limited and adjusted in such a way as to keep the immunosuppressive effect at a low level. With a patient subject to intensive chemotherapy, AFTV should be injected when the patient takes a break from chemotherapy and the number of lymphocytes in the white blood cells starts to recover after a drop (i.e. differently-timed vaccination of AFTV). It is generally recommended that the number of lymphocytes among white blood cells should preferably be higher than approx. 1,000 cells per microliter which is not, however, a strict threshold value. As long as the lymphocyte count is on a recovery track following a period of decline and when the immunological state of the respective patient is improving, AFTV therapy can be carried out even when the lymphocyte count is below a range of 1,000 cells per microliter.

Combination with Other Therapies
Hyperthermia, radiofrequency ablation therapy and high-intensity focused ultrasound therapy are all cancer treatments in which cancer cells are destroyed by heat, and can be freely combined with autologous formalin-fixed tumour vaccine. The combination with such therapies should therefore be recommended also based on a theory of working principle that heat shock proteins produced thereby should enhance the efficacy of tumour antigen action. Consult your physician, however, whether AFTV therapy should be carried out simultaneous or consecutively with other therapies. No serious adverse effect has been reported with AFTV therapy in combination with the intake of high doses of vitamin C and various health foods. It has not yet been fully clarified, however, how they interact with each other.

[1] It is considered desirable to introduce AFTV therapy when the number of lymphocytes among white blood cells should preferably is over the range of approx. 1,000 cells per microliter. It is not a strict threshold value and the timing of initiating AFTV therapy should be decided following consultation with attending physicians.

[2] The lymphocyte count should preferably be over approx. 1,000 per microliter when introducing AFTV therapy. It seems that the therapy can also be introduced at a lower lymphocyte count. Injection of peptide-based cancer vaccine leads to a significantly lower neutrophilic count whereas it does not affect a lymphocyte count and inhibits regulatory T cells (p = 0.019) even in the standard therapy carried out on advanced colorectal cancer or during the administration of FOLFOX and/or FOLFIRI. Therefore, AFTV therapy is expected to have an effect provided that the percentage of lymphocytes (to the total number of white blood cells) is over 15% and CRP is less than 1.0 mg/dl, according to a report presented by Yamaguchi University at the Annual Meeting of the Japan Society for Biological Therapy in 2012.

[3] On condition that the number of peripheral blood lymphocytes hit bottom and is recovering in the direction of over 1,000 cells per microliter after a break from the respective therapy.

[4] Peptide-based cancer vaccine can also freely be combined with AFTV in either form of injecting peptide vaccine in its original state or as dendritic cell vaccine. Regardless of the form of injection, treatment using peptide cancer vaccines is a third-party technology and we therefore recommend to consult Internet resources for more details on the required medical examinations.

Cancer cells are the proverbial “snake in your bosom”, i.e. an enemy inside of one’s body. The golden rule is to destroy cancer cells while they are still small in number. A cancer of 1 cm in diameter detected by CT scan already contains 1 billion cancer cells. The total destruction of such a cancer is not an easy job when found at this stage.

The best remedy is to detect and remove a cancer early while it is small, and to destroy tumour cells scattered unseen throughout the patient’s tissues after surgical resection of a large cancer prior to its recurrence or metastasis.

Rescue comes often too late for those patients who think that a therapy can wait until the cancer recurs.

Since AFTV has no severe side effects and can be injected repeatedly, it is an ideal remedy in treatment of residual tumour cells that cannot be clinically detected. On the other hand, it is not seldom that it takes more than three months before AFTV therapy produces an effect after its introduction. This is due to the long time required for inducing and spreading cancer-specific lymphocytes (see chronological changes of tumor markers in Case 0144). The major factor one should consider in opting for AFTV therapy is that the slow proliferation of cancer cell clusters offers a reasonable prospect that cancer-related symptoms will not aggravate too rapidly. Slowly progressing cancers are generally immune to anti-cancer agents and hard to control with chemotherapy alone. Cytotoxic T cells (CTL) activated in a patient can proliferate only if and when patients retain sufficient physical strength. A significant decline in immune responsiveness is often observed, especially in patients with cancer in the terminal stage for whom AFTV therapy is wasted and not recommended.

Combination with Other Therapies
When small numbers of undetected cancer cells are left behind after surgery, there is a risk of cancer recurrence or metastases. Radiotherapy and/or chemotherapy (anticancer agents) are routinely applied to eliminate such a risk. AFTV therapy can be combined concurrently or consecutively with well-localized radiotherapy that does not totally shut down the patient’s entire immune system and/or reduced-dose radiotherapy of less than 36 Gy with almost no effect on visceral organs, or administration of a (low-strength) anticancer agent with little effect on lymphocytes. Recent studies report that the triple-modality treatment combining these therapies is apparently effective.

Patients with bone metastases from breast cancer who have traditionally been considered “incurable” can be successfully treated with this combined-modality treatment. In some cases, their metastatic lesions even disappear completely (see Case 0406 for more details). 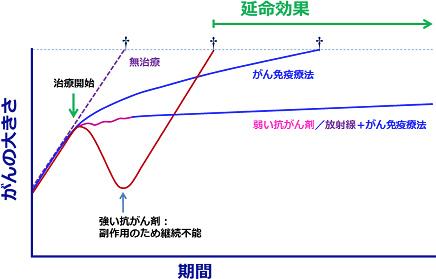 In chemotherapy using strong anticancer agents, their dose is gradually increased by measuring the reduction in cancer size and paying attention to blood test data until the maximum limit is reached. Anticancer agents generally have strong side effects and their toxicity accumulates over time through repeated administration to the point where patients can no longer tolerate them and must discontinue use of the drugs. Once drug administration is stopped, however, the cancers start to regain strength and proliferate rapidly.

By contrast, cancer immunotherapy generally takes effect at lower speed. The cancer size cannot be reduced but proliferation can be slowed down by immunotherapy. Patients treated with immunotherapy will live longer in the long run, as shown in the conceptual drawing by Mandan. The life expectancy of patients should improve further when combined with chemotherapy using low-strength anticancer agents with fewer side effects and with radiotherapy (see Fig. above).

* Although AFTV therapy may reduce the cancer size depending on the case, it is mainly used for the therapeutic effects described above.

[5] Conceptual drawing by Madan, published in the Oncologist, 2010;15(9):969-75 in which a line for “low-strength anti-cancer agent / radiotherapy + immunotherapy“ was added by the author.