Below are short case reports of our clinical experience using GcMAF immunotherapy in our clinic at Saisei Mirai. Most patients are on a variety of both conventional and complementary therapies and frequently they come to the clinic after conventional methods have failed. Since our therapies are non-toxic, they may be used successfully at any stage to improve quality of life (QOL), prolong life and cure the disease.

Initial Response After 3 Weeks of Treatment with Second-Generation Gcmaf
Responded very well from the start to GcMAF. Slept through the night to 7 AM without emptying his bladder. Has gone off all medications for pain and bladder control and is off antibiotics. Has more energy and is able to drive an adapted car. Is returning to work every day. However, still doesn’t walk and still subject to some confusion.

Response after 6 weeks of treatment with second-generation GcMAF
Has full bladder control and is off medication for bladder infections, likewise patches to assist bladder to function. Brain fog is much better. Is animated and content.

The patient is continuing treatment with second-generation GcMAF.

Patient information and summary of results:

Prof Ran Oren from the Hadassah University Hospital in Jerusalem

The patient achieved a complete recovery by August 2013

The primary doctor was surprised because the result expected from the targeted therapy was merely disease stability (rather than a cure) because of the advanced stage. However, the tumor completely disappeared with only some scar tissue remaining in the lungs.

The patient achieved a complete recovery by August 2013.

Male Aged 70+ with Glioblastoma Multiforme Brain Cancer
Glioblastoma multiforme (GBM) is the most common and most aggressive malignant primary brain tumor in humans. Treatment can involve chemotherapy, radiation and surgery. Median survival with standard-of-care radiation and chemotherapy with temozolomide is 15 months. Median survival without treatment is 4.5 months. Less than 15% of patients survive two years.

A patient, in his 70s, used tumor-derived cancer vaccine and then continued with cMAF long-term. The patient is still alive and well after two years.

This case report was first presented by Dr Toshio Inui on 29 Jun 2014 at the 9th International Congress for Medical Laser Applications, Germany.

62-Year Old Female with Uterine Cancer and Lymph Node Metastasis, Stage 4B
The patient was diagnosed with stage 4B after initial surgery in February 2011. Pathological diagnosis was serous adenocarcinoma.

Prior treatment was two times chemotherapy in March 2011 using Carboplatin and Paclitaxel. After two applications of chemotherapy, the Pet CT showed recurrence in the left iliac artery and lymph nodes and tumor markers were elevated. The patient then had a second surgery of lymph nodes metastasis in the pelvis and left inguinal region and in addition prophylactic surgery.

The patient presented himself at the Saisei Mirai Clinic in Osaka in December 2011 after extensive prior treatment. Chemotherapy had been discontinued due to the poor condition of the patient from side effects.

By 2013 patient achieved complete remission. No tumor was visible on the CT scan and the tumor marker was at the bottom end of the normal range.

71-Year Old Male with Malignant Thymoma (Cancer of The Thymus Gland) and Lung Metastases
High-Dose GcMAF (1500 ng, 0.5 ml) was administered once a week (total 48 times) together with weekly high-dose intravenous Vitamin C (total 56 times). After one year, the patient still has good quality of life (QOL) with stable disease and no change in tumour size. The patient discontinued GcMAF because he felt the treatment had been successful, however, 6 months later the CT showed renwewed tumor growth. After this result. the patient decided to continue treatment with GcMAF.

Currently, the patient’s condition is stable with a good QOL.

72-year old female with colon cancer and metastatic liver tumor, ovarian tumor and peritonitis carcinomatosa
First, the patient had surgery to remove the tumor in the colon and the ovary was also removed. She then took High-Dose GcMAF (1500 ng, 0.5 ml) treatment once a week (for a total of 48 times) and high-dose intravenous vitamin C once or twice a week (for a total of 66 times). During this period, she took targeted radiation therapy (Novalis Tx Radiosurgery) to the liver tumor at a dose of 55Gy. After one year of treatment, the PET CT scan showed no recurrence of the tumor. The patient is still in complete remission. 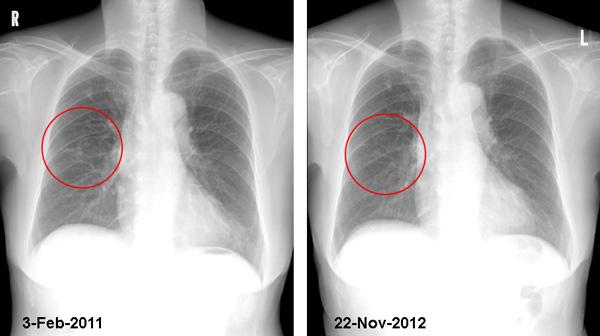 The patient took conventional therapy with all available tuberculosis antibiotics for 10 years with good effect, initially. After 10 years of treatment, tolerance to the drugs increased and the therapy lost its effectiveness. She thereupon decided to start high-dose intravenous vitamin C (25 g) once a week (a total of 239 times) over a 4-year period and took High-Dose GcMAF (1500 ng, 0.5 ml) once a week (a total of 41 times) for about one year near the end of the 4-year period. After 4 years of treatment, a chest CT scan showed only scar tissue without active pulmonary infiltrations.

One month after GcMAF therapy plus one-time low-dose palliative radiation for lung cancer.

The image at right shows that the tumor shrank by half. Radiologists treating the patient were surprised to see such a strong cancer killing effect which is not expected with small doses of radiation.

The advanced-stage lung cancer patient had low-dose palliative radiation to their right lung (left side on the scan) to treat cough and breathing difficulty caused by cancer. This radiation therapy was not designed to have a significant effect on the cancer but was applied simply to treat the symptoms. After one-time palliative radiation treatment and High-Dose GcMAF (1500 ng, 0.5 ml) therapy, the patient’s right-side lung (at left in the image) shrank by half and the tumor marker also decreased by half from CEA 890 ng/ml to 426 ng/ml two months later.

Radiologists treating the patient were amazed at the good effect which was not usual or expected with this kind of low-dose radiation treatment. Symptoms greatly improved with a significant decrease in cough and improved breathing and the patient remained active with good quality of life. We believe that the use of multimodality integrative therapy of GcMAF plus a low dose of radiation was enough to be effective, avoiding serious side effects of regular high-dose radiation. What is more surprising is that this occurred at the very advanced stage having undergone all available therapies (such as chemotherapy) just when treatments became less effective as the cancer became resistant and difficult to treat. When using GcMAF therapy, better results are seen with local treatments such as radiation (avoiding the bone marrow) over systemic conventional chemotherapies which harm the immune system.

We use cookies to ensure that we give you the best experience on our website. If you continue to use this site we will assume that you are happy with it.YesNo
Go to Top